Shopping for a new flashlight can often be confusing. But what about trying to make sense out of understanding what type of LED the light is equipped with? This is where the best CREE LED comparison can help.

Forget ‘Grease’ – CREE Is The Word!

CREE, Incorporated was founded in 1987 at North Carolina State University. The research that went into the development of cheaper and more efficient ways of producing light has almost become a household word! For those interested in handheld flashlights, the CREE LED has become the dominant force responsible for bringing the devices into the 21st century!

When You’ve Seen One, Have You Seen Them All?

With regards to some things, yes. With regards to LED’s, no. Some will say that LED’s have become smaller over the years. Some will disagree by adding that it’s the “die size” that has increased. LED’s vary in size. These differences, when coupled with the size and shape of the reflector, are what give YOU the user, the beam that you prefer.

All this wonderful technology has created quite a  challenge for consumers. It’s not enough for flashlight seekers that they must understand terminologies that relate to lumens, battery types, run times etc… but trying to make sense of the LED models themselves can be quite mind boggling! 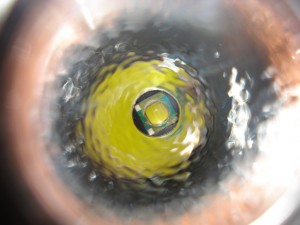 Here a basic roll call of the XLamp LED models that CREE has introduced over the last decade or so.

Basically in order of consumer appearance, are XR-E, XP-E, XP-G, XM-L. These are the LED models, so to speak. Each model, however, has several luminous flux bins. Please don’t ask me to define that terminology, just know that it exists and it’s one of the components that you should have a basic understanding of when looking at flashlight specifications.

If you read the paragraph above, then you’re already familiar with what flux bins are. If you didn’t…scroll up and read it before continuing.

The flux bins are (more-or-less) brightness codes, in the form of a rating.

There’s no denying that flashlights have become brighter over the years. And although the reasoning behind the naming of the codes means nothing to consumers, just try to remember that with each sequence of codes, the lights have added more lumens!

An example of the flux bin codes that have accompanied the LED models (as noted earlier in the article) has had naming references such as Q2, Q5, R2, L2, U2, T6, etc. These codes always follow the model number. Over the period, there have been many combinations of bins assigned which have not become flashlight components. Below, are the combinations which you are more likely to see, or have seen.

A light with this LED (if there’s still one in the clearance closet) will be several years old. Its highest lumen count will be around 300, using lithium batteries. It WILL, however, have excellent throw! (enabling the beam to travel at a great distance)

Not much different than XR-E except for its size. Performance about equal.

If you should see a flashlight with this LED…pass on it. The XP-C is a low-power LED which offers a much lower maximum drive current than others in the XP family. It’s also much cheaper to produce. It won’t offer a lot of lumens and is capable of over-heating itself to death (causing permanent failure) due to the cheaper mounting material used in the assembly. On the retail level, flashlights with this LED have been known to be sold at cost-conscious big-box stores. Check labeling carefully!

The ‘G’ and ‘G2’ line feature a boost in lumens. The ‘G2’ offers up to 20% more than the ‘G’. This line also offers throwing capability much closer to that of the older XR-E. Note that the size of the ‘G2’ is a tad smaller, producing a slightly smaller beam.

Virtually all flashlights made today use an XM-L LED. This LED produces a full-flood beam, with less throw than the XP-G.  Total lumen output for the original XM-L peaked at near 700. Differences in the T6 and U2 flux bins include higher brightness. The T6 cannot output more than 910-975 lumens. (*see note) Meanwhile, the U2 bin is 7% brighter than the T6. Overall beam distance (throw) has increased since the XM-L. Both of the more recent bins have less flood overall.

Part of what makes the XM-L visually distinctive is its slightly larger size and a six-line grid across the die.

The U3 bin has now appeared in many flashlights. Brightness has modestly increased again. Top output is 1193-1268.

Continued advances in LED technology made the XP-L LED available in the spring of 2014. 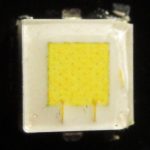 The XP-L is the same size die as the XM-L2, but it’s placed onto the smaller size board of the older XP-G. Whereas the XP-G is king when it comes to “throwing” capabilities, the XP-L doesn’t throw quite as far, but it makes up for it in brightness and the fact that it can be driven at much higher currents.

With 50% higher performance than its nearest predecessor, the XHP35 LED can be found in various types of lighting and has a traditional “domed” shape to it. At 3.45 x 3.45 mm, it’s a tiny LED… BUT can output up to 1883 lumens! One of my favorite flashlights (to date) using an XHP35 is the Olight M2R.

Meanwhile, the “HI” (high intensity) version, although the same size, is FLAT (just like the XP-L HI) and is capable of producing up to 1483 lumens! It produces a very focused beam with a tight center-spot. A good example of this, is the Manker MK41. There’s also another variation to this LED, which is designated as “HD”.

The XHP50 is part of CREE’s “Extreme High Power” class of LED’s. Once again, it’s shaped like a dome and at 5×5 mm, it’s a bit larger. It achieves DOUBLE the output of the popular XM-L2, at an impressive 2546 lumens. For an example of  XHP50 power, see the Nitecore SRT9.

For the 50.2, lumen “density” was improved a bit, even though size and shape remained the same. Output also increased a small amount, to 2654 lumens.

For the 70.2, we have slight improvements once again. This includes higher lumen density, higher voltage characteristics, reliability and optical performance when compared to the XHP70. For lumens… a ‘small boost’ to 4292 was achieved.

When Tints Were King 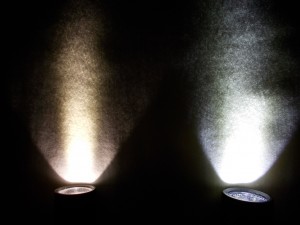 Not so much with today’s XM-L technology, but varying tint bins were all the rage with XP LED’s. Many new variations of popular lights were released with neutral white and some warm white LED bins. Although a popular alternative to the standard cool white LED color, the warmer tint bins featured fewer lumens due to the thicker LED coatings.

* I always feel it’s useful to know that there is an abundance of cheaply made flashlights in today’s marketplace. The internet is full of them. Many of these lights feature an XM-L T6 LED. And many that do, routinely inflate their lumens to 1600 and above. As noted in the XM-L section, the T6 bin is limited to slightly less than 1000 lumens. The consumer should be aware of these blatant inaccuracies.

Something else to keep in mind, are the output estimates from CREE. In many flashlights, “out the front” lumens are less than the given output which sometimes gets absorbed by the reflector. Some lights have better-designed optics to alleviate lost output. The biggest offenders in “lost lumens” are the “focusing” flashlights, whereby the beam widens and narrows by pushing and pulling the head forward and backward. These are mainly low-cost, poorly-made, generic flashlights.